This product safety directive is mandatory for all Barry Long Line Jacket owners and users.

Because of the possible risk of damaging the Long Lines and the significance of this:

As a result of flight testing and analysis, it has been determined that this modification will have no effect on the performance of the Jacket and End-Covers.

Complete inspection of the entire Barry Long Lines should be carried out regularly and in reference to: https://www.barry.ca/pages/mi-helicopter-longlines 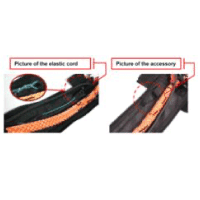